As a youngster I lived in a street of terraced houses.

We used to go the end of the block and throw a tennis ball at the gable end of the last house.

The game was to get the ball to hit the wall and the ground at the same time.

It bounces back at double the force.

Whoever caught it would get the next throw.

The game got even better when Mr Bunn came out to shout at us.

The tennis ball sounded throughout his house.

Nothing better than making strangers shout at you when you’re a kid.

“I haven’t heard that before,” he would say, “That’s original.”

He would ask us nicely to stop.

We pretended we would but we knew the game hadn’t ended.

We started up again.

Next day we would start again.

The game got even better when we found out his first name was Arthur.

We made that guys life hell.

We got older, Mr Bunn lost his hair and so did our tennis ball.

I kept the balding ball as a keepsake of my childhood.

We still hung out on the gable end of Mr Bunn’s house.

We would shout out – “Hey it’s the master baker.”

Calling him names for something we were all doing.

Occasionally we got alcohol or some smokes. Sometimes a couple of girls from school would hang out with us for a bit.

The noise of the tennis ball was replaced with the noise of us having fun.

Mr Bunn,bald as he was, looked older now when we saw him.

He didn’t come out at us like he used to. He looked old.

Life moved on and I left home for college.  I didn’t think of him much at all.

Years later my mother told me what happened to Mr. Bunn.

His wife had died in a fire in the village bakery before I was born.

All those years, Mr Bunn never said a word to our parents to make us stop.

We played that game nearly every day.

Did he think we knew how his wife died?

After college I moved back to my village . Mr Bunn had died, old before his time.

I still walk past his old house  everyday trying to get a job in town.

My friends  all moved on, I never see them now.

I remember the random cruelty of our childhood and I remember Mr Bunn.

If only we’d known about his wife sooner.

We really could have made fun of him.

I could never give an ending  that cruel, but sometimes our endings decide themselves.

But happy worker Harry is a true story.

I try to remember those childhood days, the things I did wrong.

Not knowing,not caring or showing consideration for others.

Whether you have a fictional bald tennis ball or just a memory, the pains we carry from

those days, mark the path towards knowing what is right.

I eventually had to leave my village to get work.

Nobody would employ me. I figure they all thought I knew about the fire and Mr Bunn’s wife.

I really hope Mr Bunn doesn’t send me an email from heaven.

Another life lesson,if I was capable of learning.

I struggle to tie my shoes if I’m honest. 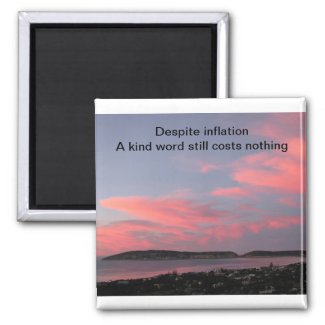 Even with inflation, a kind word magnet
by The_Rebel_Fish
This is dawn over Robberg Nature Reserve In Plettenburg Bay,South Africa.
One of the most temperate places in the world.
I’ve been in the caves where evidence of Stone age man was found. I felt quite at home.