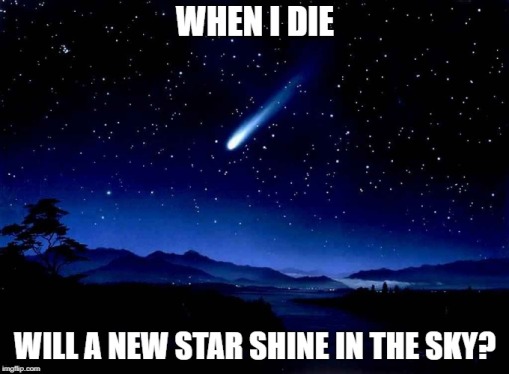 In universal time, the death of Tim Willow is imminent.

Will a new star shine in the sky when he dies?

Will anyone see it?

Or will the world have drowned itself in a sea of tears?

You will find out soon enough.

A bit like Martin Luther King, I had a dream…

The earth has been re-named.

On every corner, a statue of Tim Willow.

Every day, obeisance to the statue.

There is only one religion left in the world.

Some say in hushed tones he was not a God but just a man. What a man!

His inconsequential life and unnoticeable death had a strange effect on the world.

Like a worthless Van Gogh featuring potatoes, or something that is probably a bit rubbish.

The people who didn’t die in the Nuclear war in 2020  got to thinking about what Tim Willow had written.

They realised they had almost smiled at one or two of his bi-weekly posts.

They realised one thing.

That memory of reading of Tim Willow was the last scintilla of joy left in the world.

After the holocaust the world organised itself around the slightly surreal,slightly strange posts of Tim Willow.

Remember that time he started the anecdote provision service?

Or the way he outed sausage factories hatred of bloggers?

Human society judged people not by their net worth or color of their skin but whether something was funny or not.

Like most new ideologies the early years are strife-riven.

Some preparing to fight and die over Heavens got email.

Others supporting the more satirical,slightly darker posts about the Devil buying souls.

Some people say it didn’t make sense, other people just made sausages.

Those early days of strife were resolved, as people could go back to the original holy

texts within the Rebel Fish on WordPress.

Remember Every thought is an angel.

Or the first prophet of Willow World – Harry

Eternal peace for mankind from reading the rebelfish.

If only he wasn’t so lazy, what could he have accomplished?

Your consciousness will be transferred into neutrinos or something stupid like that.

bang, yet within it.

Lost within the eternal expansion and contraction of the universe, thinking about how

the rebelfish disproved Einstein or how he finally made sense out of sausages.

The man who died several times during the making of this blog.

You’ll also remember him as  a bit unlucky.

Eternal life was invented the day after his death.

You’ll laugh at the irony of a society, a whole world renaming itself after him – when he will never see it.

My dream ended – I awoke in a field of mildly amused cattle -but was it a prophecy?

Remember to share the memories of Tim Willow and Zager and Evans obviously.

How will you manage after I’m dead?

I recommend you get your counselling in early.

Even worse – you may never find out if I die.

That can be even worse.

I have scheduled my blog posts for the next 30 years.

My posts will appear, living or dead.