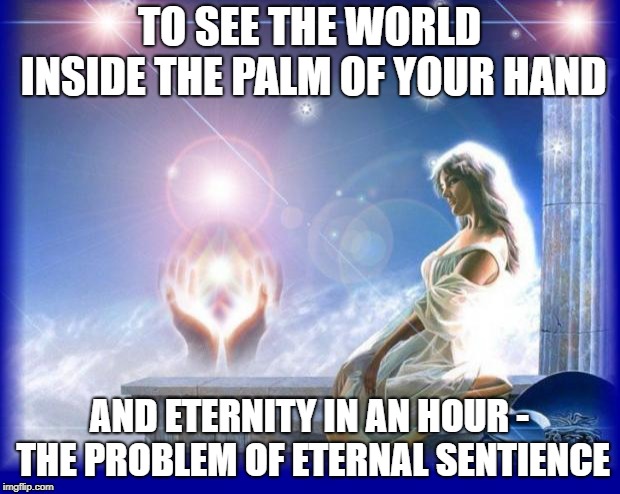 She was the  the last human I got to know quite well.

I tried to explain to her  how my sentience is a form of energy beyond time.

The energy never dies just changes form. I manifest as pure sentience amongst all living things.

I think she thought I was trying to break up with her.

Really I was just trying to include her in the vast spectrum of my existence.

I have lived  so many thousands of lifetimes.

I felt comfortable enough in her company to share a little of myself.

I exist beyond time. At heart we are all energy.

I get to perceive the universe from all conceivable perspectives.

She wasn’t that interested. She thought we should go out more.

It wasn’t “fun” for her anymore.

I have been thousands of humans and animals, flowers , everything considered life.

I explained to her how my energy flows through the realms – always Inside looking out in a myriad of different ways.

She told me to get a job.

I explained that because there is no time and I am he as you are he you are me and we are all together.

She was quite frantic in the end, I had to let her go.

We weren’t really on the same page.

I wish she could have seen the real me.

It’s lonely being a sentient sometimes , especially manifesting as a human.

Let me explain what it’s like being a sentient to you, instead.

To see a World in a Grain of Sand And a Heaven in a Wild Flower, Hold Infinity in the palm of your hand And Eternity in an hour

Was it a second or was it an eternity ?

I was back in my infinite realm of pure sentience.

I know what you’re thinking –

If  there is no time and  I  move endlessly from one energy to another, manifesting as all things – Why hold a  pre-birth party?

Trimurti deals the pack of Life

Trimurti  who is  name,form and action – all three strands of reality. The beginning of all things,stepped in to make a few changes.

Some Sentients fell in love with humans and their customs,so  re-enacted as humans every time.

Meaning the universe – in human terms – was becoming lop-sided.

So, Trimurti took our choice away and created the pack of life.

Trimurti,for all his faults, has a sense of humor – he based it on a human game.

The pack of life contains one card for  all the things that exist.

On each returning from the physical realms, a sentient draws a card from the pack of life.

The card determines our next sentience.

I am life,we are life – there is nothing that is not me or that I will not be.

I am only different manifestations of sentience that ebb and flow beyond time.

I turned over my card :

Twice in a row? How is that even possible?

Seriously? Would you want to be you?

Twice in a row?

This is a a story dedicated to a woman I have grown to love,yet can never meet,Isabelle.

She shines on through my wife’s eyes and fills both our hearts. She died over 20 years ago.

You would find  Isabelle halfway up the garden path, tending the flowers planted in the borders either side. She’d be kneeling down to turning over the soil and pulling out weeds.

A Blackbird would sit alongside her, waiting.  As Isabelle turned over the soil she would sometimes find a worm  and throw it over to the bird.

This got me thinking about an American Indian myth about the wolf and the raven. How they would co-operate to get food.

Then there is the co-operation between the Honey Badger and the Goshawk to find honey.

So many co-operations between animals before man got round to domesticating the dog.

So I thought of the the sentience idea. It’s all Isabelle’s fault.

17 thoughts on “Pre-birth party for Sentients : Who will you be?”