‘If the mountain will not come to Muhammad, then Muhammad must go to the mountain’ arises from the story of Muhammad, as retold by Francis Bacon, in Essays, 1625:

I try my best to minimize problems in my own life.

As most people are making mountains out of molehills, I very much turn mountains into molehills.

It is actually one of the main reasons I got my last job – working for Mohammed.

He was having a lot of his time wasted.

New mountains were appearing everywhere, growing out of the negative imaginations of people and their ability to exaggerate.

Normally that is called ‘Family’.

None of my family worked, so I had to try and support them somehow.

But mine weren’t the only family who created mountains out of molehills in the world  -which was keeping Mohammed so busy.

Mohammed had zero free time, he was always going to the mountain.

Who would actually believe you could take the mountain to Mohammed?

I actually left my business card at the Mosque one day

Word spread that I was actually turning mountains into molehills.

He didn’t believe me at first.

I explained I could simply bring the molehills directly to him.

He could then claim that the mountain came to Mohammed.

He didn’t realise I was employing my family to create the mountains out of pure negativity.

Then I could turn them back into molehills and collect my fee.

In the end, I was caught keeping moles as pets.

My family reported me after I stopped giving them work.

A good job,while it lasted.

Do you want to buy some moleskin slippers?

I climbed up it one day,suitably scared. Treading carefully as there were sheer drops on one side.

A whole class of school children came bumbling past me, bouncing along. Not a care in the world.

It was hard to say what was more scary – the children or the Lions Head.

This is a photo of the Lions head taken from the top of Table Mountain. 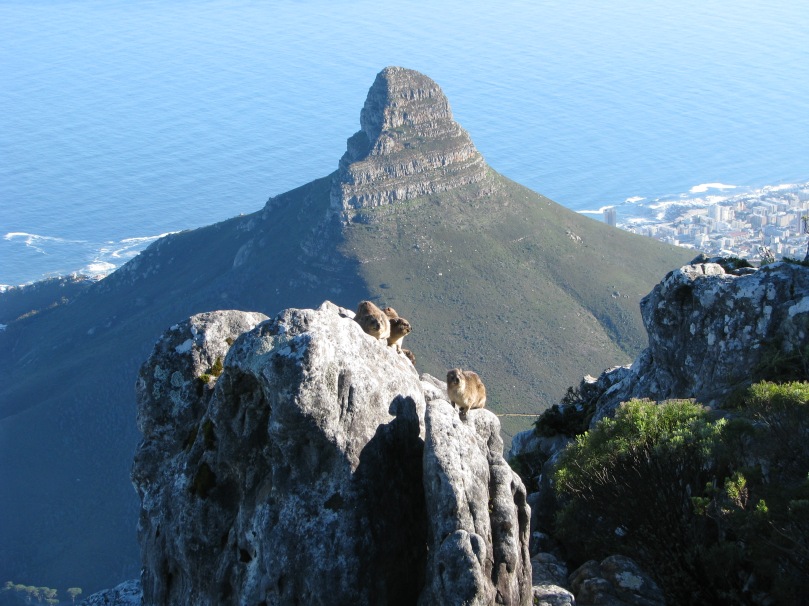 Those little thingies on the rock are Dassies or Hyrax. David Attenborough will tell you they are related to Elephants.

I’m pretty sure he just says the first thing that comes into his head these days.

“This is a toast tree. I can’t get my butter tree to grow,unfortunately. I think it’s the soil type”

Why don’t you ask me a silly question and I’ll give you a silly answer.

Which means I’ll try and do a post based around it.

9 thoughts on “If you turn the Mountains into Molehills what will Mohammed do?”